The Vantage was the VRCBC’s regular full colour newsletter until 2014. Each issue featured a fascinating mix of stories from the past, opinion pieces – some serious, some not – plus miscellaneous race reports and Club news, all compiled by the editor, Tom Johnston. 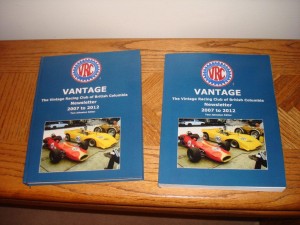 Editor Tom Johnston has compiled an anthology of the seventeen (17!) VRCBC Vantage Newsletters from Summer 2007 to Autumn 2012. There are two versions; a soft cover version in black and white and a hard cover version in full colour. 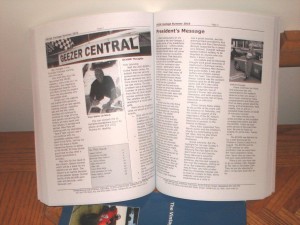 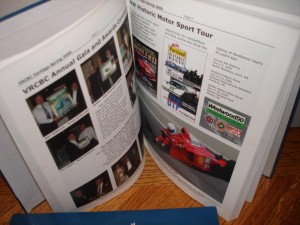 How to buy your copy:

Robin Fairservice on what Donald Healey was up to before he created the legendary Austin Healeys. Mike Tate discusses the difficulties inherent in making comparisons between various drivers. Tom reports on the recent induction of four local road racing legends into the Greater Vancouver Motorsport Pioneers Society and there are two photo montages from the BCHMR and some English motorsport points of interest.

A review of the BCHMR, Robin Fairservice on Elva Cars, the GVMPS Induction Ceremony, Mike Tate’s interview with Walter Wolf, Tom Johnston remembers both the IOCO Hill Climb from the past and this year’s Monterey Historics, and Madeline Wood describes Ian’s ‘Rawlson adventures’ at the recent CSRG Charity Challenge at Sonoma Raceway.

Robin Fairservice on the history of the ground-breaking 500 cc Formula 3, Mike Tate with more reflections on the Goodwood Revival, and Tom Johnston on the SCCBC’s Jones Lake Hill Climb and the mysteries of the Snell Foundation and SPI.

Robin Fairservice on Connaught, Mike Tate at the Goodwood Revival, and Tom Johnston on the ‘maybe Canadian’ Spike Rhiando and the 1952 SCCBC race at Fort Lewis, WA.

Robin Fairservice on the Aston DB3S, Mike Tate on Minis and Tony Carruthers’ Report from Kiwi-land

BC motorsports pioneer, Arleigh Pilkey and the early days of the XKE

Annual Gala and the only race ever at Cassidy Airport (Nanaimo)