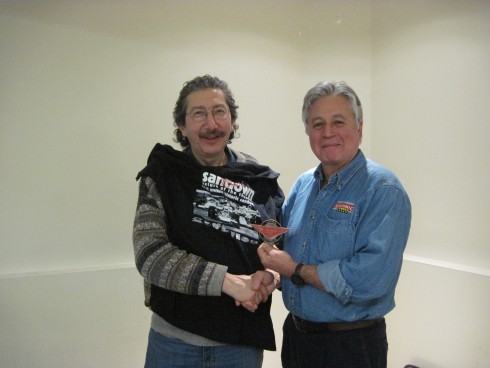 Long time 'Big Healey' racer, Ivan Lessner (L) is charged by Stanton Guy with the custodial responsibility for the Austin Healey Owners Club of Victoria (Australia) car badge donated to the VRCBC by Les Mathieson at the 2012 BCHMR. Ivan is also 'modeling' a 2012 Sandown Historics T-Shirt from Les. - VRCBC photo[/caption]

The VRCBC had some special visitors at our 2012 BC Historic Motor Races. Les Mathieson and his wife Zonda, Austin Healey enthusiasts from Victoria, Australia dropped by to cheer on our 'Big Healey' racers. They also presented the Club with an Austin Healey Owners Club of Victoria car badge. (Of course, they received a VRCBC car badge in exchange.)