Adrian Ratcliff with his Genie Can Am car, which he had personally restored over several years. – photo courtesy GVMPS

Sadly, one of the original members of the VRCBC passed away suddenly on June 8th. Adrian Ratcliff had appeared to be in good health until he was diagnosed with terminal cancer only a few weeks ago. A Celebration of Adrian’s Life was held on Sunday, June 26th at the Semiahoo Fish and Game Club in Surrey.

More recent members of the VRCBC know Adrian as one of key members of our excellent BCHMR commentary team, always contributing knowledgeable and witty comments – better known as ‘Adrianisms’ –  about the on-track action. Older motorsports enthusiasts however, remember Adrian for his own racing exploits.

In the words of his longtime friend (and one of the founders of the VRCBC) David Birchall:

“His driving style was spectacular! On the original 165 x 400 mm Michelins he campaigned for many years, usually sideways …  I recall at the 1979 Portland Historics the organizers called him in for a “discussion”, never having seen anyone drive in such uninhibited style! “Corner? What corner?” he would say, the car sideways with smoke pouring off all four tires.” 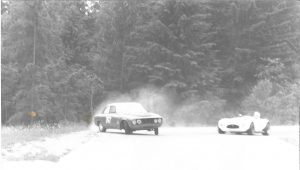 Adrian Ratcliff demonstrates how to take Turn 2 (Clubhouse Corner) at Westwood in his Alfa 2600 while racing with the late Ray Cooke’s Cobra circa 1981. – photo courtesy David Birchall

In 1985 Adrian rolled ‘Piggy’ during a race at Westwood. He was lucky to survive. With no roll bar and only a lap belt when the driver’s door came open as the car rolled, he was thrown from the car during the roll and was lucky not to be crushed – I kid you not. He was sucked back in by the grace of…   ‘Piggy’ was not so lucky and never ran again.

Adrian’s superb controlled slides in that Alfa were pure magic. The day he rolled the Alfa at the Westwood hairpin is still a vivid memory for me as he rolled it because his brakes failed, and he was about to rear-end me at a very high rate of speed as I braked for the hairpin in my little sports racer. I probably would not be here talking about it today had he not risked his own life.

Adrian had also raced an (in)famous Lotus Elite during this period. It was famous because it had originally been owned by Innes Ireland (who apparently disliked it intensely) and it was infamous with Adrian because it seemed to be continually plagued with bad luck.

Adrian replaced ‘Piggy’ with a Lotus Cortina, which he continued to race until Westwood closed. Adrian was a ‘larger than life’ personality and his old friends have many more great stories about him.

The Genie Can-Am car that Adrian restored so beautifully – he called it ‘the Old Girl’ – is now owned by Mac McGarry of California. Mac has forwarded us this photo of the Genie in action last year. 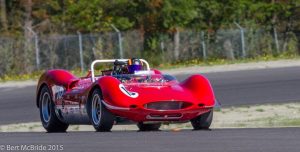 Mac McGarry in his Genie Can Am, formerly owned and restored by Adrian Ratcliff. – Bert McBride photo courtesy of Mac McGarry

All of the members of the VRCBC offer their condolences to Adrian’s family and his many friends.