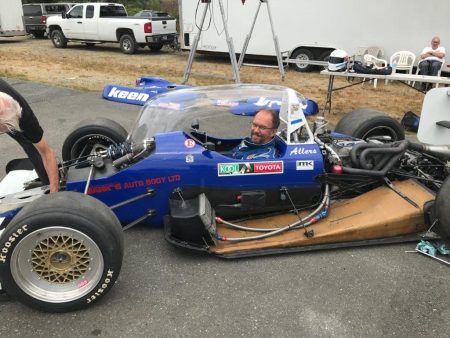 The VRCBC took advantage of the BC Historic Motor Races to carry out some initial testing of the new clear cockpit canopy being proposed for introduction with the 2018 Open Wheel Vintage Racing rules on April 1st.  The design work was done by the (in)famous ‘Arold’s Engineering of Chipping Sodbury.

Doug Lorraine is confident that the wide side openings will allow him to easily scrape the frost when ice racing his 1978 Lola T540 in his home province of Alberta. – IWE photo

The canopy is almost invisible when viewed from head on. Other racers will still be able to identify their pursuer. – IWE photo

Al Ores was very pleased with the more Vintage look the new canopy gave his 1976 Caldwell D13 but was concerned that the increase in top speed would give him an unfair advantage over the other Vees. – IWE photo