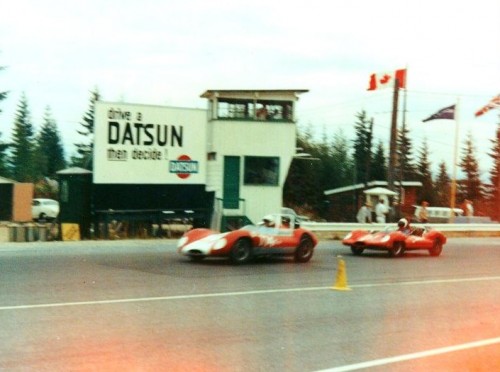 Mike Gee, a long time member of the west coast road racing fraternity, passed away on October 5th. Tom Johnston has written the following about someone who was initially a fellow competitor and then subsequently a good friend.

In recent years, we in the VRCBC knew Mike Gee as that ‘older guy’ who came to our races at Mission and occasionally wrote articles about our races for Victory Lane and similar magazines. But there was often talk about his racing at Westwood in the 1960’s. 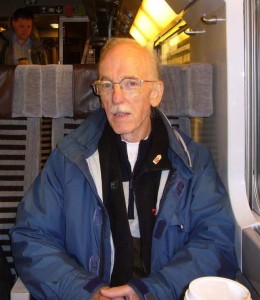 I first met Mike when I raced against him at Westwood in 1967. I then re-met him years later when he was putting together a series of video tapes from collections of other people’s Westwood movie film collections. I then met him again when I was writing my first book: ‘Sports Car Road Racing in Western Canada’. Mike helped me with all of the information he had collected, and also gave me at that time the above photo from his files of our 1967 race. Mike had an amazing collection of transcribed newspaper reports on Westwood races culled from the archives of all of the local newspapers.

As I got to know Mike better, we worked together to find the history of his unique Cooper racing car; the one shown in the photo. The trail led from the Island of Jersey to Monza, then to Westwood, being lost for a number of years and then recently discovered in a Kamloops backyard. It is currently being restored.

Mike gave me some information about his background; a MA in English who taught all over the world, a pilot, a former railroad telegrapher, a photographer, a writer, a RCAF member and a militia volunteer; a very interesting guy.

A private memorial was held for Mike on October 13th. It was my pleasure to meet his loving family and his friends from all aspects of his long and interesting life.