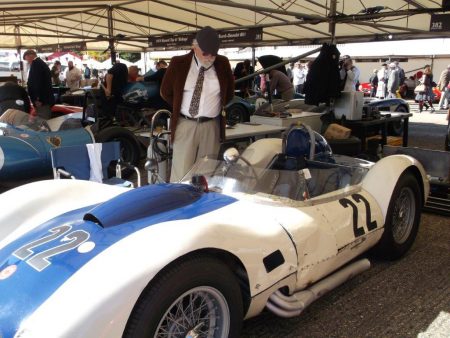 Morgan – Yes; they still make them out of wood! – Al Reid photo

The Rover-BRM gas turbine car that finished seventh in the Prototype category at the 1965 Le Mans race. – Al Reid photo

Only in England; a hedge sculpted into a Williams F1 pit stop! – Al Reid photo

Not exactly a legend, except to Pierce. – Al Reid photo

Goodwood – Lola-Chevrolet T70’s as far as the eye can see. – Al Reid photo

You never know who you will meet at Goodwood. Our correspondent Al Reid (R) with VRCBC Vice President Paul Haym (L), cleverly disguised as a distinguished-looking Brit! – Pierce Isaacs photo