Two of the VRCBC’s finest competed in the 2022 Leavitt Machinery Knox Mountain Hill Climb. President Mike Zbarsky was a first timer with his rare 1967 Triumph 2000. In contrast, Larry Sandham’s Mini Vauxhall has lost count of how many times they have gone up that hill together! – Jim Moody photos

After missing two years (for well known reasons), the Leavitt Machinery Knox Mountain Hill Climb was back over the May long weekend. Our intrepid roving reporter (and long time supporter) Jim Moody braved ‘the wilds’ of the Okanagon in order to send us this report and photos of some of the highlights. Thanks very much Jim!

The recent Victoria Day weekend saw the return of the Knox Mountain Hill Climb after the event, for the two previous years, had been cancelled. This year’s event, the 63rd Okanagan Hill Climb, was held under pleasant sunny skies. The two day event saw 54 drivers challenge the road course and a large turnout of spectators enjoyed the racing action both days. VRCBC was well represented along with other vintage entries. Club president Michael Zbarsky made his first appearance at Knox. Michael’s best time with his 1967 Triumph 2000 was on his final run turning a 2:30. 325.

Jasper Thomas, making his first appearance, arrived at Knox Mt. with his 1970 Dodge Challenger. His time of 2:14.528 on his 7th run would be his best. A long time competitor at Knox, Fred Del Pero with his 1969 Alfa Romeo GTV got his time down to 2:02.921 this year. Doug Yip with his son Trevor returned to Knox Mt. with the Tesla Cobra EV. Trevor’s best time this year was 1:54.435.

The FTD winner of this year’s event was Mark Uhlmann racing his Stohr WF1 up the Knox course with a very quick time of 1:39.989. Mark’s time was just 2.924 seconds off the record time set in 2007 by John Haftner with his Tui Super Vee.

In all, 12 drivers posted times under 2 minutes and a few more entries very close to that mark. It was a successful weekend of Hillclimb racing I think all would agree. – Jim Moody

The full results are available on the event web site (here) and the event Facebook page (here) has more photos and an onboard video of the fastest time of the day by Mark Uhlmann.

Check out more of Jim Moody’s photos below!

END_OF_DOCUMENT_TOKEN_TO_BE_REPLACED

The second races of the 2022 VRCBC’s Vintage racing season took place on Sunday, May 15th at the Speed-Fanatics Motorsport Circuit. (If you haven’t already heard, that is the brand new name for our long time home, the Road Course at Mission Raceway Park.) This was the second event of the VRCBC’s very own IWE-REVS points series for 2022.

The Vintage races were just part of a full weekend of road racing organized by the Sports Car Club of BC (SCCBC) and sanctioned by the Confederation of Autosport Car Clubs (CACC). The weather was not very cooperative (unless you enjoy ‘liquid sunshine’) but road racing goes ahead ‘rain or shine’!

Thanks (as always) to Brent Martin for some photos (see below) of the action during the morning practice session. All of Brent’s many photos are available on his website (here). Make sure to check them out and order at least one of yourself (or your favourite ‘hero’ driver if that’s not you) in action!

The complete results for the weekend, including those for Vintage, are available on the SCCBC web site (here). The next races at the Speed-Fanatics Motorsport Circuit are scheduled for the June 11-12 weekend. See you there!

END_OF_DOCUMENT_TOKEN_TO_BE_REPLACED

And We’re Off for Another Vintage Racing Season! 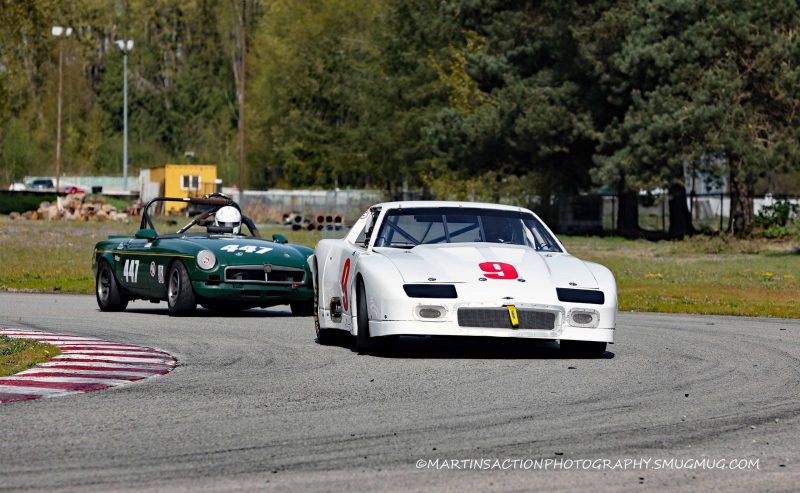 Once again, Brent Martin captures the torrid Vintage action! John Elliott (’69 MGB) closes in on Ryan O’Connor (’85 Camaro) through Mission’s Turn 5, shrewdly setting him up for a pass – or perhaps just some bump-drafting – along the straight between Turns 6 and 7 …. or maybe not!

The 2022 VRCBC’s Vintage racing season got underway on Sunday, April 24th at the Speed-Fanatics Motorsport Circuit. (If you haven’t already heard, that is the brand new name for our long time home, the Road Course at Mission Raceway Park.) This was the first event of the VRCBC’s very own IWE-REVS points series for 2022.

The Vintage races were just part of a full weekend of road racing organized by the Sports Car Club of BC (SCCBC) and sanctioned by the Confederation of Autosport Car Clubs (CACC). The weather was excellent for racing and thanks (as always) to Brent Martin, we have some great photos (see below) of the action. All of Brent’s photos of the full weekend will soon be available on his website (here). Make sure to check them out and order at least one of yourself (or your favourite ‘hero’ driver) in action!

The complete results for the weekend, including those for Vintage, are available on the SCCBC web site (here). The next races at the Speed-Fanatics Motorsport Circuit are scheduled for the May 14-15 weekend. See you there! 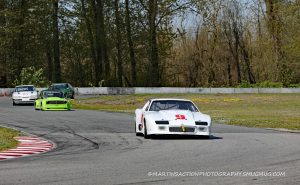 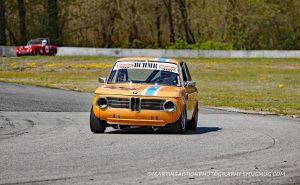 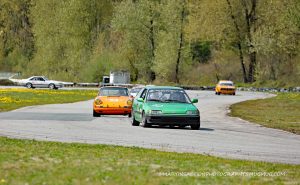 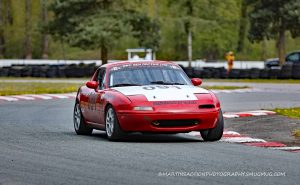 If you squint, you can (almost) see that Shawn Allen has lifted his ’90 Miata’s inside front wheel off the tarmac in Turn 6. 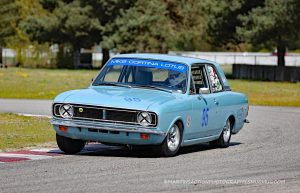 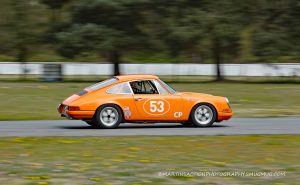 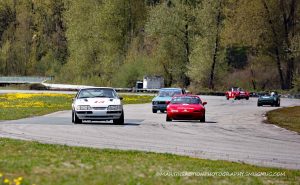 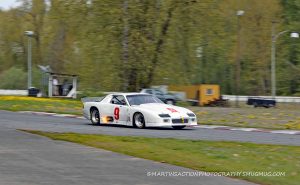 Ryan O’Connor has the Camaro belching fire going through Turn 4. 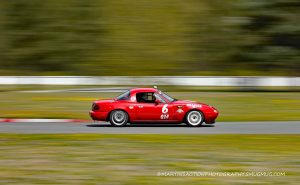 Wynn Hollingshead streaking by in his ’92 Miata. 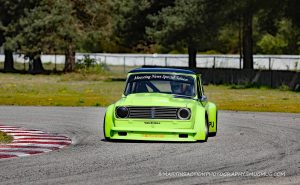 Larry Sandham rounding Turn 5 in his cleverly disguised Vauxhall. Larry has been campaigning this Mini Vauxhall throughout the PNW for many years. 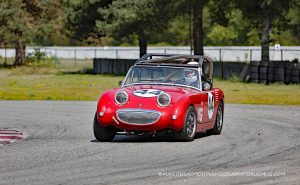 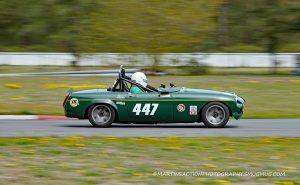 Vintage Discipline Director and VRCBC stalwart John Elliott shows how it was done with body English ‘back in the day’, in his BA Oil-sponsored MGB. 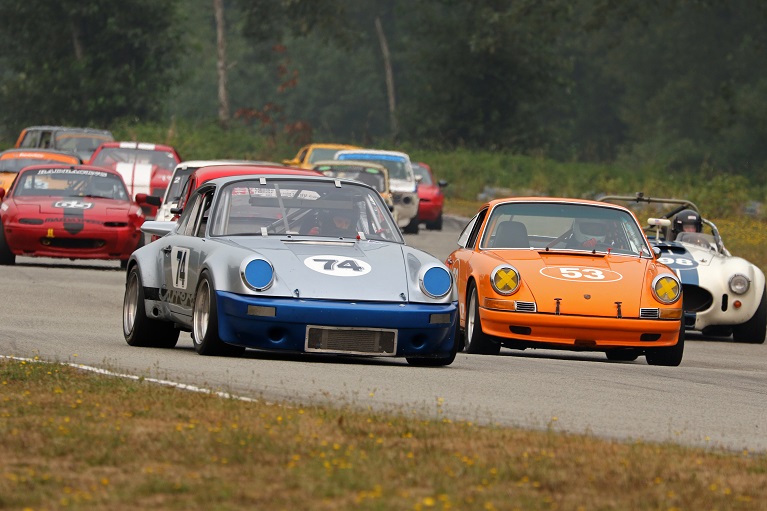 The VRCBC is very pleased to announce that entrant registration for the 2022 BCHMR has just been opened on MotorsportReg.com. Just click here to get your race entry in now!

We are now finalizing the plans for the return of this favourite motorsport event after being forced to cancel for two long years. The BCHMR has its own website (here). The most recent information and contacts will always be updated there. Check back often.

We look forward to seeing you at the track on the August 6th – 7th weekend! 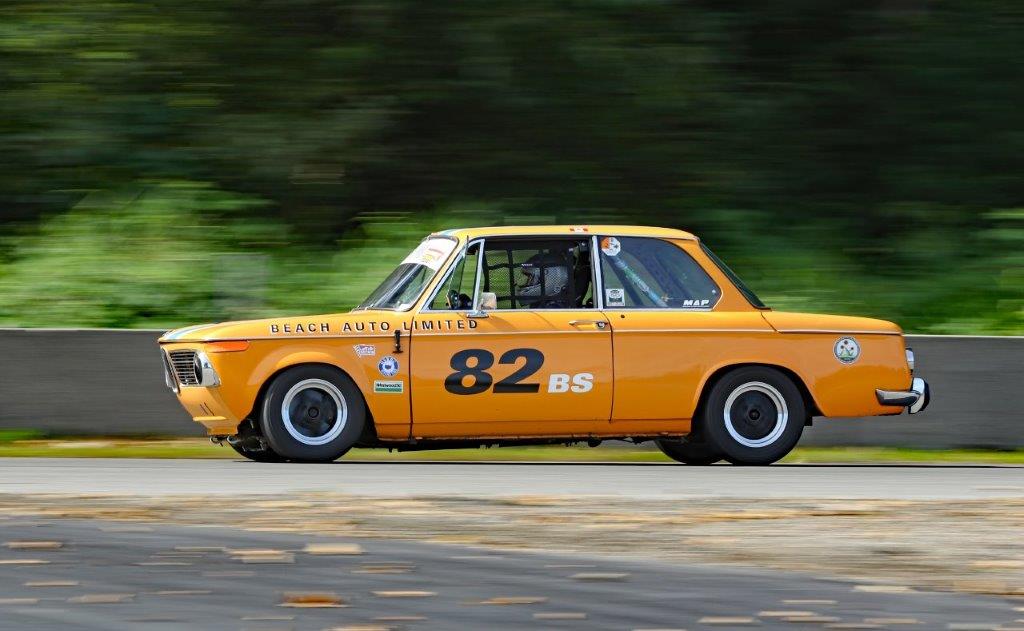 Paul Haym is ALWAYS ready to go at the start of every season – are you? – Brent Martin photo

The race schedule for the 2022 season at the Road Course at Mission Raceway Park is now confirmed; at least it is as confirmed as possible in these days of pandemics and shutdowns at short notice. The VRCBC’s finest – plus some of our closest friends – expect to be racing on the Sundays of the SCCBC weekends as always, as well as at our very own BC Historic Motor Races during the August 6-7 weekend.

The current schedules are posted here. Everything is of course subject to change, so be sure to check back often. See you at the track!