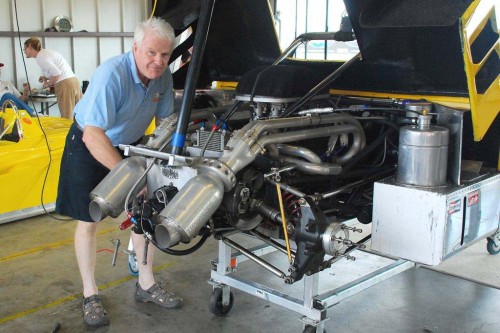 The Classic Sports Racing Group (CSRG) held its annual Charity Challenge at Infineon Raceway (formerly Sears Point) in California over the Oct 1st-2nd weekend. Veteran VRCBC racer Glen Gibbons and his wife Karen, and the club’s good friend and frequent photograph contributer Jim Moody and his wife Colleen went down and have sent us this report.  (Thanks folks.)

VRCBC stalwart Ian Wood was there with his Rawlson and had a very good weekend. In Sunday’s Group 6 race, he placed third ahead of the big block Can Am cars of Tom Malloy (McLaren M8E), Jim Stengel (McLaren M8F) and Fred Cziska (Shadow DN4A). Fellow VRCBC member Keith Frieser won the race with his Lola T290 with second spot taken by R Smith in his Chevron B-19.

Jim Moody checks to see if his toes have melted after his ride in the M8E – K. Gibbons photo

Glen Gibbons waves to his many fans during his ride in Jon Norman’s (worlds fastest) Alfa GTV – K. Gibbons photo

Glen can’t stop smiling after his ride in the Trans Am GTV – K. Gibbons photo

The Rawlson ‘exposed’ – I. Wood photo

Finishing it off – I. Wood photo

Watch your head – I. Wood photo

The Rawlson ready to go – I. Wood photo

Ian and the Rawlson leave the Pits – I. Wood photo