PI leads the grid to the Starter. - Jock Hobson photo[/caption]

Veteran VRCBC MGB chauffer Pierce Isaacs - a.k.a. PI - was on the Pole for the second REVS Vintage race on October 6th. Just like all of his other fellow pole-sitters (i.e., the Vettels, Hamiltons and Alonsos of the racing world), Pierce was called upon to autograph countless (well, ... maybe eight) photos for his sponsors and Fan Club (well, ... maybe other team members and hangers-on). It can be tough at the top sometimes but Pierce came through like a champ. 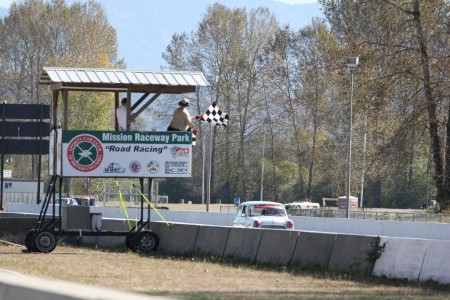 The VRCBC's Finest were in Fantastic Form during the SCCBC's Flying Feathers Weekend on Saturday, October 6th. There were lots of entertaining battles throughout the field in both of the races. The weather was perfect and it was a great way to celebrate Thanksgiving and to finish off another great season of Vintage road racing at Mission Raceway Park Road Course.

The final results are available on the SCCBC web site (www.sccbc.net ) or just click here.

Thanks again to Brent Martin for providing (most of) the photos below.

Update: All of Brent's photographs are now posted on his web site (here). Look for the 'Mission Raceway (Vintage Group) Oct.6, 2012' album. 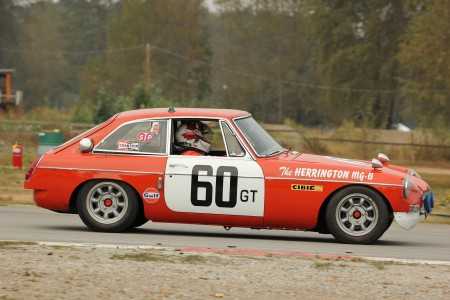 Sunday, September 23rd saw some of the VRCBC's finest hit the track at Mission Raceway Park for two Vintage races during the SCCBC's 'Volunteer Memorial' Weekend. In addition to some excellent racing, this event saw the Mission debut of Ralph Zbarsky's former BMC Works Team 1967 MGB GT, now beautifully restored. Ralph raced this car at Sebring in March of this year - see our earlier story here. (Don't miss the link to the You Tube video showing the car's roll over at Sebring in 1970. Hint: It wasn't Ralph!)

The first race got off to a great start. Dennis Repel was leading until about half distance when the throttle stuck open going into Turn 2. Major streaks of rubber were required to get the 'Heavy Chevy' (with its dyno-proven 406 hp) Camaro stopped in time.  Judicious use of the kill switch enabled him to get back to second place behind Mark Brown before the finish. They were followed by Phil Roney, Ian Thomas, and Roger Flescher. The next three places featured a close fight between Ian Wood, Al Harvey and Paul Haym. Then Peter Valkenburg and 'the Zbarsky Train' of Mike and Ralph. Al Reid had to retire his MGB after only nine laps.

At the start of the second race, Mark and Phil tried desperately to outbrake Dennis into Turn 1 but couldn't manage it and Dennis took the lead, only for his engine to let go in a (very) terminal way, entering Turn 1 on the fifth lap. Mark managed to see through the spray of oil well enough to take charge, particularly since Phil had already broken an axle shaft after only two laps. Roger took second, followed by Ian Thomas and then the scrapping trio of Ian Wood, Al Harvey and Paul Haym. (Just to show how close these three were: on the fourth lap, each of them turned a lap time of 1:24.1!). The Zbarskys were next. Peter Valkenburg and Al Reid had issues and were several laps down.

The full results are available here.

Update - October 9th: Gerry Frechette has added his 148 photos of the Vintage action on September 23rd to his web site. ( http://gerryfrechette.zenfolio.com/  ) or just click here to go directly to that album.

A big thank you to Brent Martin for providing the photos below. You can see the rest of his photos on his web site: www.martinsactionphotography.smugmug.com or  just click here to go directly to his September 23rd Vintage album of 136 photos. 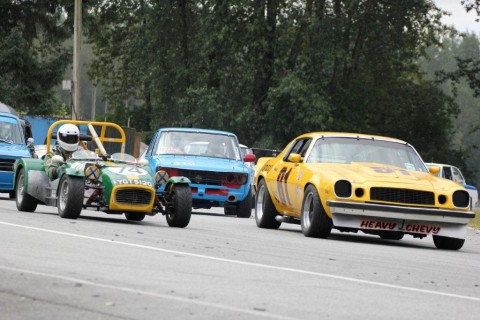 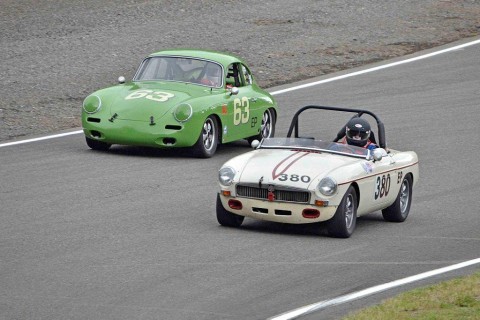