06 Dec The VRCBC is Middle-Aged! 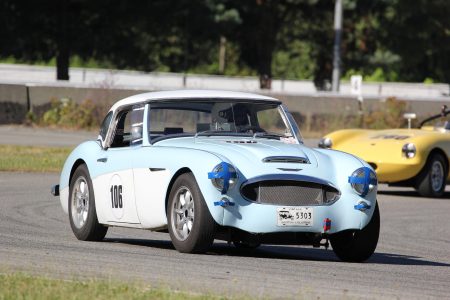 Ivan Lessner first raced his 1958 Austin Healey 100-6 BNG at Westwood in 1987 and has raced it with the VRCBC every year since. – Brent Martin photo

We have just been reminded that the VRCBC was ‘born’ on November 28, 1976. In the words of David Birchall, one of the founders and now one of our BCHMR race commentators:

‘The call went out to all the one make car clubs and Colin Fitzgerald hosted the initial meeting at his house. Subsequent meetings were at Peter Price’s palatial premises, Sports and Vintage Cars at 393 Powell Street in the downtown east side.’

That means that the VRCBC is now 40 years old, which by some definitions is the beginning of middle age. That will be a comforting thought to many of our current members!

Happy Anniversary to us! Here’s to another 40 years!