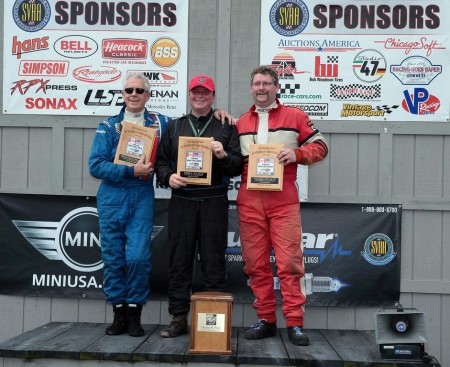 Can-Am Mini Challenge: The M3 Class Podium with the third place man, our boy Geoff on the right, runner-up Richard Paterson on the left and the winner, UK Mini-legend Nick Swift (of Swiftune fame) in the centre. – photo courtesy Can-Am Mini Challenge

Classic Mini enthusiasts gathered at the famous Mid-Ohio Sports Car Course for the Can-Am Mini Challenge, celebrating the 55th anniversary of the ‘real’ Mini. The Mini Challenge was one of the feature races in the Sports Car Vintage Racing Association’s (SVRA) big ‘2014 The Mechanics Bank Vintage Grand Prix of Mid Ohio‘ over the June 26th-29th weekend. 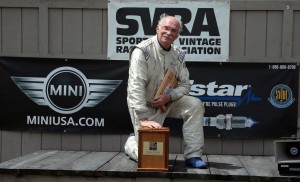 The VRCBC was very well represented. Two of the biggest Mini enthusiasts anywhere, VRCBC members Geoff Tupholme and Bob Beauchemin made the long trek from the BC interior to Ohio, and they did us proud.

In a field of 48 racing Minis of every description (‘standard’ Vintage eligibility rules didn’t really apply!), Geoff finished 8th overall and third in class and Bob (after a slight off-course excursion on the last lap) came 10th overall and won his class. (See the results pages here and here courtesy of the SVRA.)

But the VRCBC connection didn’t stop with our two local heroes. Club ‘alumni’ (and ‘monster’ Mini enthusiasts) Rachel and Andy Nelson (who now live in Ontario) were also heavily involved in the event. Andy took 14th overall in their beautifully restored 1965 Cooper S. He also loaned their very fast 1963 Cooper S to well-known British Mini tuner Nick Swift, who proceeded to take second overall and win his class. (Check out his story of the event on the Swiftune web site here.)

And last but certainly not least, Rachel was the lead organizer of the Mini-Challenge. It will not surprise VRCBC members who remember her great contribution as a member of our Executive, that this event was a huge success.

Click here to see a short video of the start of the race; Geoff goes by in 10th place and Bob in 12th. (Mission Raceway Road Course racers will be interested to know that there are no sound level restrictions at Mid-Ohio!)

The Can-Am Mini Challenge Facebook page (here) has many more photos and videos. And an online album with over 300 photos of the full SVRA event (not just the Minis) can be viewed here. That great ‘Montage of Minis’ below was created by Richard Coburn. You can visit his Facebook page here.