As has now become the tradition, the VRCBC kicked off their new race season on March 19th with a Kart Fest Enduro at TBC Indoor Kart Racing in Richmond. The Enduro was promoted as a fund-raiser in support of our BC Historics Motor Races in August but in reality, it is primarily just an excuse for members of the VRCBC, SCCBC, META and their family and friends to have fun on the track!

Each team was assigned a race track name and had three randomly selected members:

The awards were all original Westwood trophies from the 1970’s, which had been refurbished for this event. Good, clean racing was enjoyed by all who attended and the VRCBC thanks everyone for their support! 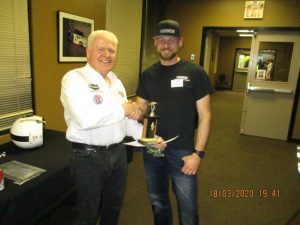 Event Co-organizer Ian Wood (L) presents the Fastest Driver Overall award to Ryan Jansen. Ryan ‘upgraded’ (ahem) from his very fast GT1 Camaro to one of TBC’s karts and set the fastest times. At this rate, he will soon be racing in Vintage! – Patrick Stewart photo 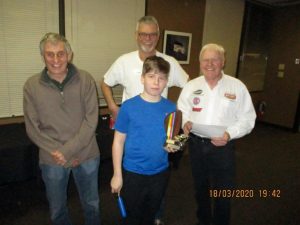 These photos of the action were taken by co-organizers Patrick Stewart and Ian Wood.