Posted at 09:27h in Uncategorized by vrcbcadmin 0 Comments
0 Likes
Share

Thank you to Brian Meakings for passing on this schedule for the "Mountain High Racing" at Westwood for 1985. Those were the days! ... 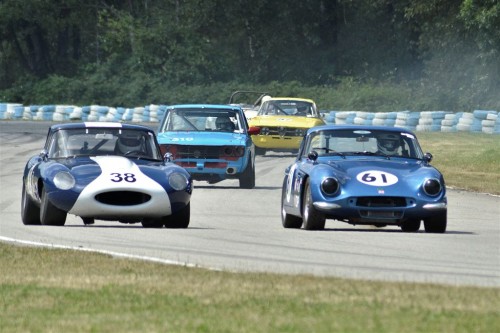 Vintage Racers were out in force at the Children's Charities Grand Prix over the August 6th-7th weekend at Mission Raceway Park Road Course. Seventeen drivers were entered for the two Vintage closed wheel races along 'the River's Edge', including Myles Winbigler and Dave Klein up from the State of Washington. There was some great racing throughout the field - in the words of Lotus Seven pilot Mark Brown: "It was awesome!". Dave Kuckein won both races in his Camaro, with Gunter Pichler taking second from Mark in the first race. Mark returned the favour in the second race. Dennis Repel earned the Hard Luck Award for the weekend with a broken throttle cable ruining practice early and then a broken axle in the first race.

The full results for practice, qualifying and both races are available here. (Thank you to SCCBC's Timing & Scoring team.) Check below for some action (and not so much action) photos. (Thanks to Jim Moody for the use of his.)

Posted at 13:07h in BC Historic Motor Races by vrcbcadmin 0 Comments
0 Likes
Share

Victory Lane Magazine is a 'Must Read' for all Vintage Auto Racing fans. The monthly, which now also includes vintage rallies, concours and special events, covers the sport like no other periodical. Just click on the cover above to go to the Victory Lane website, which...

[caption id="attachment_4226" align="aligncenter" width="500" caption="Ian Wood's extra practise in his Rawlson at the BCHMR paid off in the Kart Enduro. - Paul Bonner photo"][/caption] The VRCBC held its Second Annual Kart Enduro on July 19th at the F440 track in Tsawwassen. The race was run in three heats...