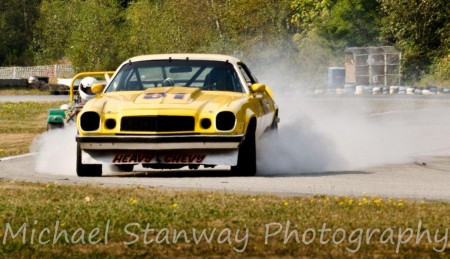 Dennis Repel was leading the first race on September 23rd when his throttle stuck open entering Turn 2. Mike Stanway captured the moment as Dennis laid on the anchors big time while a startled Mark Brown, who was right behind, tried to figure out what to do. Mark said later: “My instincts told me to steer towards the air without tire smoke and it seemed to work.”

With judicious use of the kill switch through the rest of the race, Dennis was able to recover back to second place. In the subsequent laps, it was Phil Roney who got to watch the display. (See the other photos below.) Great photos Mike; thanks.

Not quite so spectacular the second time around but Phil Roney (TVR Vixen) still decides to watch from a safe distance. – Michael Stanway photo

This time, Dennis decides that Phil is getting too close and (successfully) lays down a little more smoke. – Michael Stanway photo