The VRCBC at the ABFM

The 2011 All British Field Meet (ABFM) – otherwise known as the  Greatest Show on British Wheels – was held Saturday, May 21st. (Click here for more information.)

The ABFM began in 1985. Since then it has grown to become the largest of its type in Canada and the Pacific Northwest, overflowing the magnificent lawns of Vancouver’s VanDusen Botanical Garden with some 600-plus classic cars and motorcycles, and more than 6,000 enthusiastic visitors.

The VRCBC had its usual booth just inside the main entrance. In spite of the damp (genuine British?) weather, we had many enthusiasts drop by and pick up information on the Club and the BC Historic Motor Races. Club members Al Harvey (MGB), Mark Brown (Lotus Super Seven) and Ralph Zbarsky (MGA Twin Cam) exhibited their vintage British racing cars next to the booth. They had a great time answering questions about their cars. 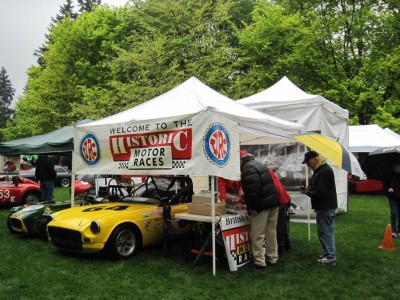 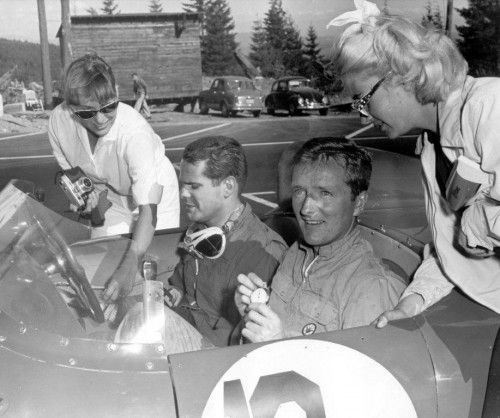 Well known Pacific Northwest racer Pete Lovely passed away on May 15th, at the age of 85. Among his many other accomplishments, Lovely won the first ever race at Laguna Seca Raceway in a Ferrari in 1957, and also set the first lap record at Westwood on its opening day- July 26th, 1959 – in a Lotus 15. Lovely was one of SOVREN’s most illustrious members. The VRCBC offers its condolences to his family and to his many friends.

Two links to ﻿The News Tribune of Tacoma: here and here . 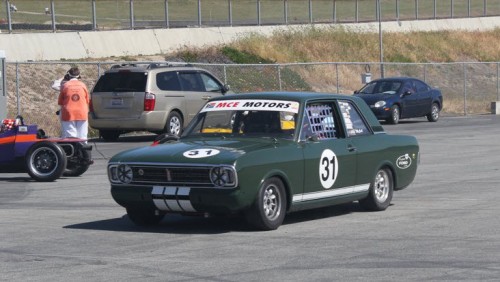 Several VRCBC members got in some pre-BCHMR warmup by taking part in the Vintage Spring Classic at Mazda Raceway at Laguna Seca, in Monterey California over the April 30-May 1 weekend.

Geoff Tupholme sent this link to a YouTube video of the start of the Sunday Feature. That’s Geoff in the white Mini in about 15th place.

Thanks to Myles Kitchen, we also have some photos of two others, Alan McColl and John McCoy, who were entered in the special ‘English Ford Day at The Races’ group.

Some more of Myles’ photos are shown below. All of them can be seen in his gallery here.

END_OF_DOCUMENT_TOKEN_TO_BE_REPLACED

First REVS Weekend in the Books 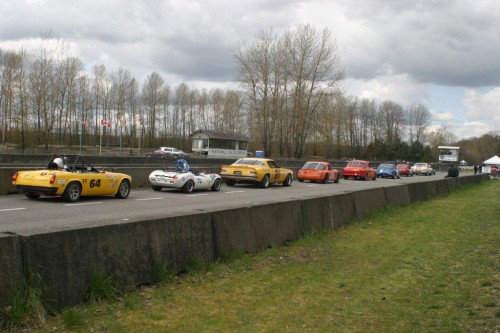 The first REVS race of the year was held at Mission Raceway Road Course on a mostly sunny, Sunday, April 17th. There were ten closed wheel Vintage entrants plus four more formula cars running in the Open Wheel group.

Phil Roney set the pace in Qualifying in his TVR Vixen, just managing to break below the 1:19 mark. He was followed by the two top ‘noise makers’ from Dyno Day: Dennis Repel’s Camaro and Gunter Pichler’s XKE, who were both well into the 1:19’s. They were followed by 2010 REVS Champion, Mark Brown in his Lotus Super Seven, Gord Houghton’s Mustang, Al Harvey in his MGB, Evan Williams’ TVR Grantura, Lorne Andras in his newly – acquired (from Jim Latham) Volvo 122S, John Carroll’s beautiful Ginetta G4 and Keith Wong in his Triumph GT6.

The first race had the fast cars – Gunter’s XKE, Dennis’ Camaro, Mark’s Lotus, Phil’s TVR and Gord’s Mustang – playing together up front. They were followed by Al Harvey’s MGB all on his own, then Evan’s TVR Grantura, John Carroll’s G4 and Dr. Keith Wong in his GT6 changing places.

The front runners played give and take throughout the second race but some early season gremlins did rear their head: Dennis’ Camaro developed engine troubles, Lorne’s Volvo suffered from a massive oil leak and Gord’s Mustang broke down. It was a good day’s racing with practically everybody discovering items that will need attention before the cars are ‘exercised’ again in May.

The full results are available here (Thank you to the SCCBC.) and also on the SCCBC web site (www.sccbc.net) under Race Results.

Photos on Facebook: VRCBC members Ann and Alan McColl have posted several photos of every racing car on their MCE Motors Facebook page. Just go to http://www.facebook.com/pages/MCE-Motors/150264761670790  and make a Friend Request.

END_OF_DOCUMENT_TOKEN_TO_BE_REPLACED 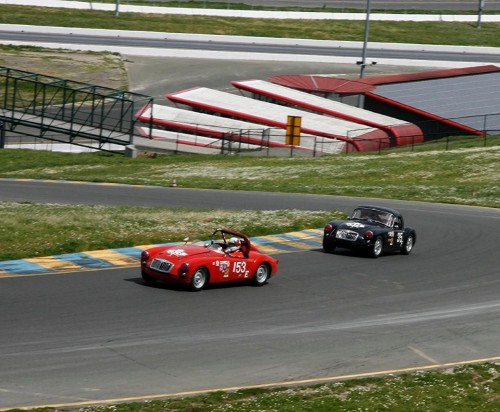 Two long time MG racers and VRCBC members have gotten in some early practice for this year’s BCHMR. During the first weekend in April, the father and son team of Ralph and Mike Zbarsky ran their well-known MGAs in the special MG West Coast Reunion races at the Classic Sports Racing Group’s (CSRG) opening event at Infineon (formerly known as Sears Point) Raceway. You can look forward to a story about their adventures in the next Vantage Newsletter, and also, of course, for them to run strongly at the BCHMR on June 11th – 12th. 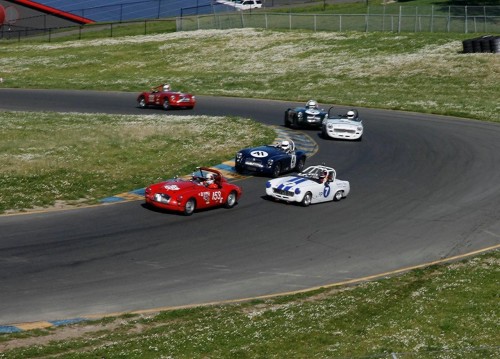